Whatever the reasons, the Accordo disappears as a source, and images emerge unconstrained by box or driver, attaining credibly natural scale in the room. The Absolute Sound

Written by our colleagues at Audioreference in New Zealand is a very interesting description of the Accordos and a comment from Franco Serblin.

DESIGN
The Accordo are stand mount speakers from the Italian company Franco Serblin. They have two-way design with bass-reflex. The high frequencies are reproduced by a 29-mm soft dome tweeter, designed by Ragnar Lion, the result of nearly 30 years of development work. The midrange and bass is handled by a custom modified top Revelator series Scan-Speak 150 mm midwoofer. The sliced paper cone features a number of precisely angled slices, dramatically reducing “break-up” modes in the diaphragm and preventing the formation of standing waves between the coil and the suspension. With the patented Symmetrical Drive (SD) motor system (using copper caps or rings in the magnet system which results in uniform magnetic flux density throughout the air gap and a symmetrical drop on both sides of the gap), dynamic distortions have been significantly reduced in comparison to conventional drivers. In the cone centre, instead of a dust cap it features a long, metal phase plug improving driver’s response at higher frequencies and improving cooling.

The drivers are mounted on the rounded profile cabinets, covered with leather (or its perfect copy). In the front we have rubber “strings” stretched on a chrome-plated frame – a very characteristic detail of former Sonus Faber designs.The cabinet is made of hardwood staves, with the inside top and bottom plates made of aluminum and magnesium alloy, to make it more rigid. Very intriguing cabinet geometry, where the cabinet tapers sharply from the front baffle towards the back, and apart from the top and the bottom, no other walls run parallel to each other, adds further rigidity. The cabinet was clearly designed in such a way that looking at the speakers from the front you cannot see the side walls, no matter how much toed-in the speakers are. Bass-reflex port is not directed exactly towards the rear, more to the side. 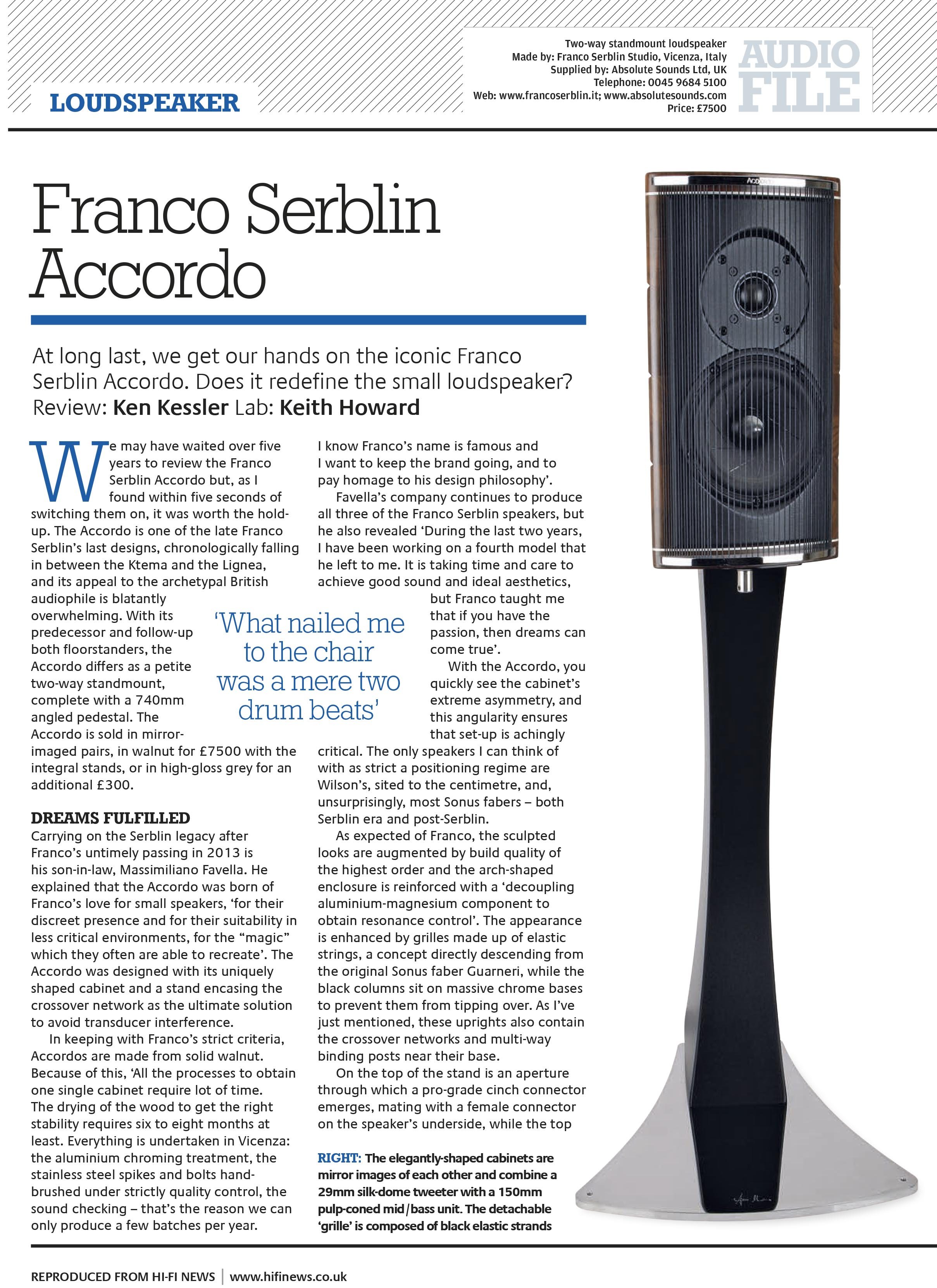 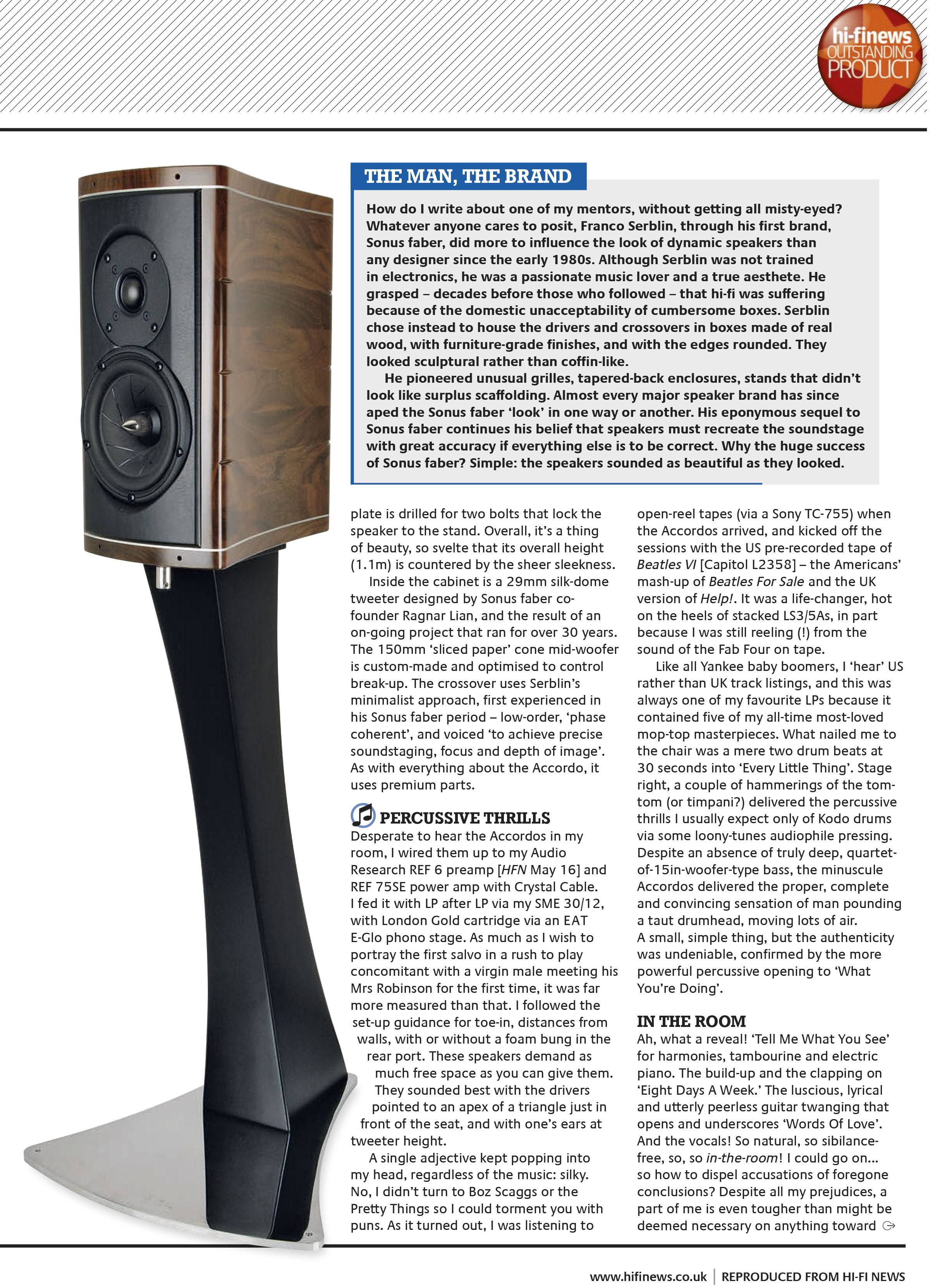 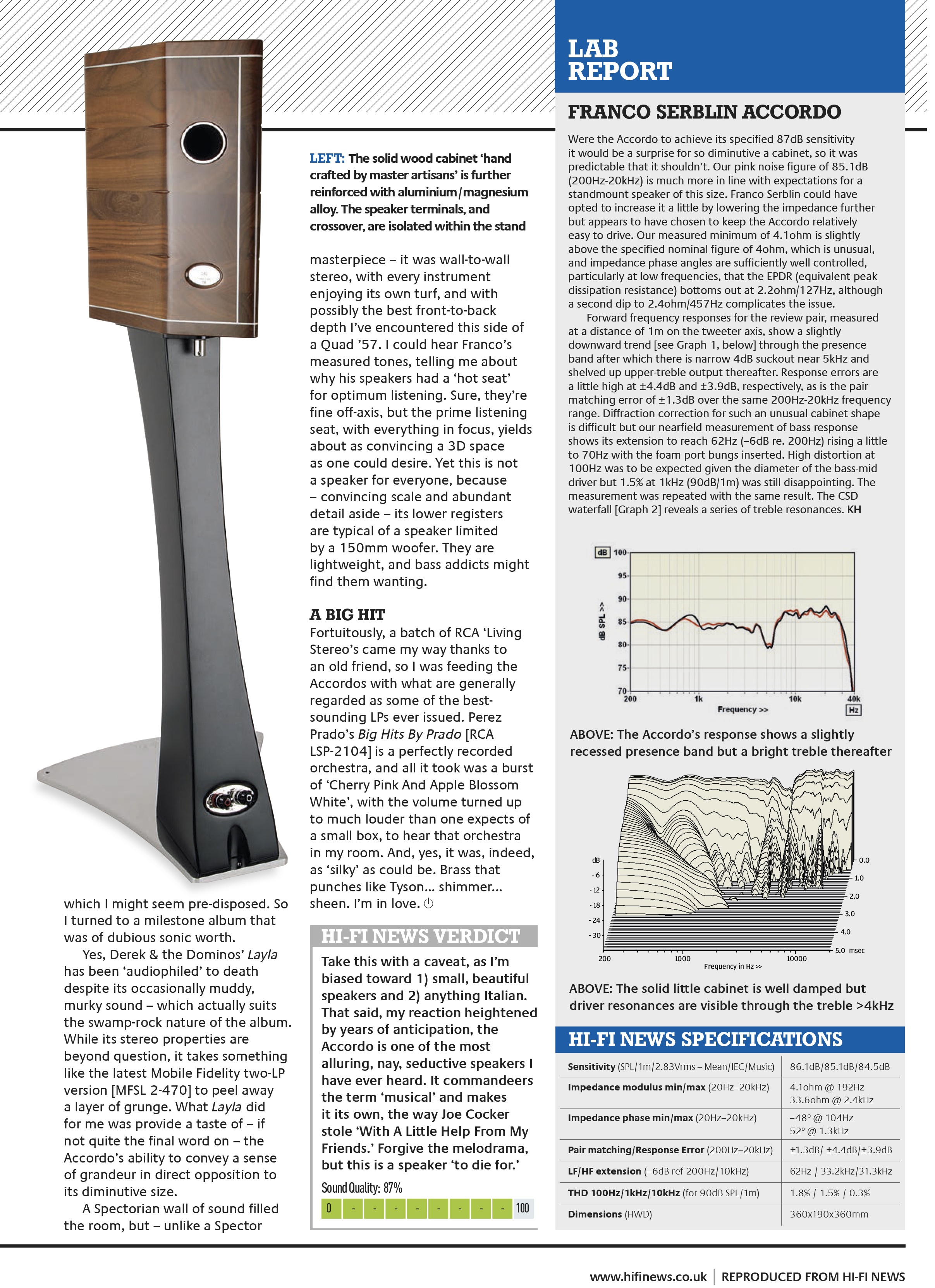 The port wall is dampened. The speakers arrive with stands that form their integral part. The stand consists of a large metal base plate onto which we bolt a hollow “leg” made of MDF. On its top we bolt a small aluminum plate, onto which, in turn, we secure the speaker. I must admit that it is not a very stable design; there is always a bit of wobble between the base plate and the “leg” and hence the whole system is not perfectly rigid. And the stands are not too heavy. To complete the picture let’s add that they sit on three spikes – two in front and one in the rear.As I said before, speaker crossovers are housed in the stand “legs.” They feature air core inductors, polypropylene capacitors and non-inductive resistors. The crossover is of low order. It is connected to the drivers with a special (patented) Neutrik plug called Speakon – the best speaker plug that I know of, once used by Dynaudio and today only by professional companies.

Regular speaker binding posts used in the audiophile audio, no matter how good, look like a joke next to the Speakons. And the posts located in the base plate are really good – a new design from Furutech. Internal wiring is supplied by Yter Audio, a company run by Massimiliano Favell, Mr. Serblin’s son in law of. A note from Franco Serblin on Amplification:”Let me clarify some issues related to amplification for the Accordo. These speakers have been designed to be as transparent and dynamic as possible. In order to successfully achieve this objective I have used a unique woofer with a long-stroke diaphragm and low resistance in bass-reflex application, designed to offer the best impulse response. Although the Accordo can be driven by any amplifier, we recommend driving them with amplifiers with low output impedance and middle power output i.e 40/70 W into 8 Ω and 80/150 W into 4 Ω.

Too much power may result in too long woofer cone travel and consequently deterioration of signal quality.If we use the Accordo with a tube amplifier or a solid-state MOSFET with high output impedance we may not end up with fully optimal bass control, and this may lead to uncontrolled cone travel. Needless to say that tube amps are generally not as good in this respect. However I personaly use the Einstein integrated hybrid /tube amplifier, nice sounding, but with not such good bass as solid state amps.”……………