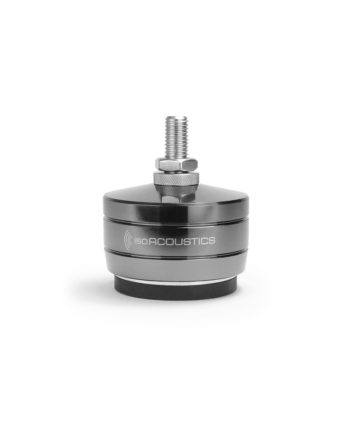 The GAIA isolators are machined stainless steel units that incorporate IsoAcoustics’ patented design to provide a high degree of speaker isolation, while resisting lateral movement and oscillations, to maintain accuracy and alignment with the listening position. Internal reflections from the hard supporting surface are attenuated resulting in greater sound clarity and openness.

The soundstage blossoms to open up a three-dimensional image of natural, spatial sound.
The GAIA-TITAN models each come with 3 common thread sizes which will fit most speakers of this size.

The IsoAcoustics patented isolation design is directional. Optimal results are heard by installing the GAIA-Titan isolators with the logo facing the listening position, or rotated 180 degrees, to align the isolators with the speaker’s motive forces.

The GAIA-Titan’s lower isolator is designed to adhere to the supporting surface. For carpeted flooring, Carpet Discs are available for each GAIA-Titan model which allow the GAIA’s to connect to the solid flooring below.

The IsoAcoustics isolators reduce internal reflections to eliminate smear. The result is an open stereo image of natural spatial sound.

IsoAcoustics Inc. has been manufacturing and distributing isolation products in audio industry since January 2012. The patented IsoAcoustics technology is based from years of experience in the design and construction of radio and television studios.

The driving force is Dave Morrison, closely involved in planning and building radio and television studios at the Canadian Broadcasting Corporation for close to 20 years.

Dave Morrison was part of the design team faced with the challenges of building the world’s largest multi-media center in Toronto: over 1.72 million square feet, with recording studios for drama, music, and chamber ensembles, special effects, radio and television shows.

Based on patented designs, IsoAcoustics has developed products for the Professional Audio and home project studio, the HiFi and consumer market, and large applications that include Pro Audio, HiFi and Live sound.

IsoAcoustics distribution is structured with separate channels for Pro Audio and Home Audio, with product development within these channels. In this relatively short period of time, IsoAcoustics has grown rapidly and now sells in over 60 countries.