Artikelnr: auralic-aries-g2 Kategorier: Auralic, Elektronik, Strömma musik Taggar: Auralic, bridge, dsd, dxd, stream, streamer, Streaming, strömma, transporter Brand: Auralic
Aries G2 Streamer has just received top honours with an ‘Audio Excellence award in the highly respected UK quarterly ‘Hifi Critic’ journal. Andrew Harrison writes;
‘Construction quality of the milled chassis is formidable with immaculate fit and finish. Just as turntables are more critical in the foundation of good sound than either tonearm or cartridge, so here the digital source was guiding the sound onto a firm footing before the following ancillaries.
Timing and pace, constrained only by the following system, were beyond reproach.
Stereo images tightened and took stronger root, with much increased space – dark, black space – between those images. With only one surprising hiccup, the soundstage was clearer of the subliminal fog that can clutter much digital playback.’
‘ When focused on listening, it was a joy to browse easily through a colourful library of sound, as I would with LPs, or search at whim for any random soloist, composer or song – and have the results appear near-instantly, then play with negligible interface lag. And once selected, to hear even CD rips sound so solid and real, that when heard from the kitchen I found myself rushing at
the end of a familiar album, in haste to turn the record over.’
‘ The Aries G2 does a seemingly simple job exceptionally well, a delight with high-resolution sources but also revealing untapped potential from 16-bit digital audio.’

The AURALiC ARIES G2 includes all the rock-solid connectivity and one-of-a-kind features found in the original award-winning ARIES, and builds on them by introducing original engineering designs focused on isolation, separation and protection against interference. Not just a big brother to the ARIES, the ARIES G2 is an enhanced streaming device endowed with cutting-edge technologies and proprietary innovations. Whether on its own or working in consort with other G Series devices from AURALiC, the ARIES G2 is for music lovers who require the most discerning approach to modern streaming. 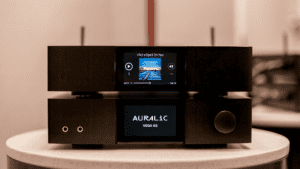 Like all streaming-capable AURALiC products, the ARIES G2’s expansive wireless connectivity options are thanks to its native integration of AURALiC’s custom-built Lightning Streaming technology. Lightning Streaming uses existing Wi-Fi to create a dedicated music streaming network capable of wirelessly delivering the highest resolution musical formats available, up to DSD512 and PCM 32bit/384k. Lightning Streaming brings with it all the features you’ve come to expect from ARUALiC streaming devices too, like Gapless Playback, Memory Caching, Bit-Perfect Multi-Room, and Upsampling.

Along with the ARIES G2 and the G series of products from AURALiC, we’re also introducing a browser-based interface for configuring Lightning Streaming and its features, allowing universal access for the first time from any smart phone, tablet, or computer.

In addition to compatibility with AirPlay, the ARIES G2 is a certified Roon Ready endpoint for seamless integration with Roon software, making it one of the most flexible streamers available in hi-fi. 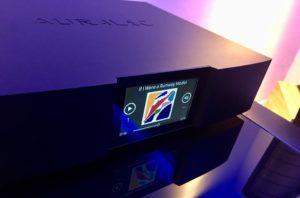 Different from the other HDMI based I2S connection, the bi-directional Lightning Link opens the door to jitter-free operation of all the devices in your system. Clocking information from destination devices such as the VEGA G2 can drive the ARIES G2 timing for perfect data synchronization. Lightning Link also carries system control data for everything from volume control to processor engine setup, allowing all linked AURALiC devices to appear in a single, unified control interface.

The AURALiC Tesla G2 Platform is the revamped heart of the ARIES G2, and it packs a processor that’s 50% faster than the Tesla G1 platform, with twice the system memory (2GB) and data storage (8GB) of the previous generation. Tesla G2 not only handles the most demanding audio formats with ease but drives the ARIES G2’s software processing engine and its advanced DSP functionality, including upsampling duties and a bigger Memory Cache for an exacting level of sonic quality and stability. As always, automatic updates keep the ARIES G2 up to date with the latest feature set and support, continually expanding its functionality and ensuring peak performance. 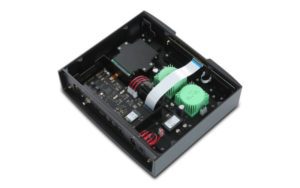 Physically separating electrical circuits while allowing data to flow between them, Digital Audio Galvanic Isolation in the ARIES G2 offers a new level of protection against electromagnetic interference. We created two special high-speed galvanic isolators and configured them between three primary circuits in the ARIES G2. Noise-sensitive Femto Clock and digital audio transmitter systems, as well as the central processing circuit are completely isolated from each other, eliminating jitter and contributing to an unparalleled level of clarity.

AURALiC’s Purer-Power technology already re-examined every detail of power delivery with innovative wiring and circuit designs based on the concepts of isolation and purification, and it was a key to the pristine operation of the original ARIES. Now, the ARIES G2 takes that approach a step further by using two internal Purer-Power linear power supplies, separating and protecting distinct power circuits from interference. The first Purer-Power supply feeds the ARIES G2’s processing circuit, LCD display, and storage – whether internal or attached via USB. The second Purer-Power pathway is dedicated to sensitive audio components such as the Femto clock and USB audio output. Both power supplies are galvanically isolated from each other to ensure zero EMI interference between them.

We’ve retained the use of two Femto clocks in the ARIES G2 for incredibly detailed signal handling. The first clock drastically reduces jitter across the AES/EBU, Coaxial and Toslink outputs. But timing issues can affect sound quality from output via USB too, so there’s a second Femto clock dedicated to the USB controller in the ARIES G2. No matter which route you choose, you’ll benefit from extremely precise timing and low jitter thanks to these super-accurate clocks.

The ARIES G2 is housed in a completely redesigned enclosure – the Unity Chassis. It’s machined from a single billet of aluminum and specifically designed for the premium lineup of AURALiC G Series products, right down to mass balancing and the shape of its foot spikes. The Unity Chassis excels at shielding the inner workings of the ARIES G2 from EMI and providing superior dampening and absorption, reflecting the obsessive attention to noise reduction throughout the G Series.

The ARIES G2 connects to all your favorite sources of high resolution digital music, no matter where they are. But if you prefer to store your music locally, there’s an internal drive bay capable of housing any 2.5” HDD/SSD. With an internal drive installed the ARIES G2 becomes a powerful and flexible streaming music server, ready to deliver an exceptional audio experience.