The 432 in 432 EVO refers to 432 Hz, and is one of the possible frequencies used for tuning acoustical instruments in the keynote A. Over the coarse of the last centuries!

32 EVO AEON
The word aeon /ˈiːɒn/, also spelled eon and æon (in American English), originally meant “life”, “vital force” or “being”, “generation” or “a period of time”, though it tended to be translated as “age” in the sense of “ages”, “forever”, “timeless” or “for eternity”.

The 432 EVO AEON is our new flagship model. The AEON is all about time as a life force, the music “being” here. It all boils down to timing. The 432 EVO AEON builds upon our HIGH-END model and has gone where no Linux based music server has gone before.

1.High-end USB3 clock + modified USB3 interface
The AEON model features a dedicated low jitter clock board for the USB3 card thereby bringing the realism of the USB output to a whole new level of realism.The clock is powered by a dedicated 9 Volt Sbooster supply which also powers the USB3 interface, and the server part is powered independently.

2. AEON software jitter tuning
The sound of music servers is greatly influenced by the tuning of software parameters such as buffers, kernel parameters, process schedulers, priorites, ….. This is a domain that is generally not well understood among developers as it is difficult to measure and quantify.

Furthermore chipset parameters were tuned, in order to disable certain parts of the chipset that influence the sound.
The AEON model shares the same improvements as our HIGH-END model over our standard model:

1. spring suspension system
Most music servers on the market use cheap 3.5″ green drives from manufacturers such as WD. While these drives claim to be low noise, they still have (seek) noises that can be heard from 10ft (3 meters). To quiet such a drive they are typically put in an enclosure which is decoupled from the music servers case by rubber bumpers. Unfortunately, this solution still passes vibration to the case.

The 432 EVO AEON version solves these problems in a completely innovative way:

no 3.5″ drives are used, but only the more expensive 2.5″ notebook drives are used in all 432 EVO models
these ultra low noise low power consumption 2.5″ drives are than suspended on a custom inhouse built platform that features a spring suspension system
no microphonics are passed from the HDD back to the enclosure (AEON and HIGH-END versions only)

2. RAM playback
The AEON version adds RAM playback. We use a technique that works on the fly: when a new music file is played, the file is read into memory in a fraction of a second. It has been implemented in such way that it does not add delays and does not break gapless playback.

By reading the whole file as one big chunk of data, we eliminate further access on the SATA bus. In terms of sound quality, RAM playback relaxes the sound.

The 432 EVO AEON version now has a dual-end linear power supply, with separate DC rails for the server and the high-end USB 3.0 audio board. This is again one step higher than the HD-PLEX power supply where both 12V and 9V output voltages required by our high-end model were shared via one transformer. Now each voltage has a separate supply. The server part of the 432 EVO AEON consumes about 1 amp at 12V, which is a third of what the supply can provide. For the audio part, the 9V supply consumes a fraction of what the supply can do.

The standard version has an external laptop style power supply with similar total output power (150 Watts), but is not linear but switched mode.

4. High-end USB 3.0 audio
The AEON model includes a high-end USB 3.0 interface, which is backwards compatible with all USB 2.0 dacs, offering superior sound than any onboard USB outputs. The AEON has a dedicated superclock board that feeds the master clock into the USB3 card, whereas the HIGH-END model does not have this superclock. The card receives a dedicated feed from the linear supply, completely isolating the power from the server.

5. SATA filtering
the SATA cabling is electrically noise filtered, eliminating any difference between SSD and regular HDD’s (high-end version only)

6. software jitter tuning
We went as far as the measure the software jitter of the 432 EVO using very expensive equipment.
This allowed us to tune the Linux kernel for better sound quality for our current platform.

This special tuning is not present on the ESSENCE and STANDARD model, but makes a big difference!
In the AEON model, this tuning has gone a whole lot further than what we have in the HIGH-END model.

What is 432 Hz ?
432 Hz is one of the possible ways to tune musical instruments, also known as the Tuning Note “A” and A=432.
Music tuned to 432 Hz sounds better than contemporary music which is tuned at A=440. 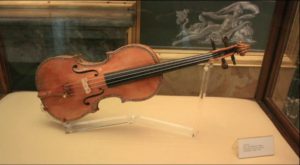 During historical periods when instrumental music rose in prominence (relative to the voice), there was a continuous tendency for pitch levels to rise, also known as the pitch inflation.
At the times of Bach, the baroque tuning used A=415 Hz. The famous Stradivarius was tuned to A=432 Hz according to the Verdi tuning. Instruments from old civilizations such as the Greeks and Egyptians were also tuned to A=432 Hz according to backto432hz.org . Indian instruments also are based on A=432 Hz.
In 1939 Germany and England determined 440 Hz as the frequency of the musical pitch, after first recommendations in the 19th century, as production of A=440 instruments already started before 1900.Their effort to standardize this worldwide didn’t succeed for then. But in 1955 at a congres of musicians in London, 440 Hz still became the international ISO 16-standard. Many protests of (among others) French musicians, who didn’t want 440 Hz as the standard, didn’t help unfortunately.

A higher pitch sounds sharper and more “fresh”, but also more aggressive, which is not a quality audiophiles are looking for. 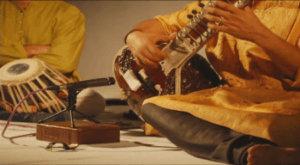 Geert Huinink, the producer behind DJ Tiësto, has been using the knowledge of 432 Hz for years, which is probably the secret why his records are so popular.

How does 432 Hz work?
Based on cymatics research, which is the study of vibrational patterns that are the result of exposing matter to certain frequencies (like water or sand), there’s a big difference between A=440 and A=432.
The water sound images of A=432 are more clear with much higher harmonics, while A=440 just looks like “bad soup”. We refer to the research of Robert Boerman and the video’s of Jamie Buturff.
The cohhlea in our inner ear is a water filled spiral, which resonates naturally to music tuned to A=432 Hz, as the cochlea is based on the principles of phi-demping. A well known example is the famous B&W Nautilus speaker (the original one), which spirals are based on the same principe. 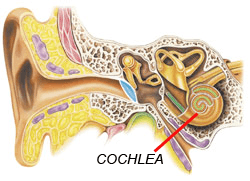 The team behind the 432 EVO organized focus groups which resulted in 60 trials. In 95% of the trials, our panel found music retuned to 432 Hz the better version. Listeners are more emotionally involved, while 440 Hz is a more “mental” experience. Our research is public, and visitors can look at all the data: more than 60 listening hours were documented. 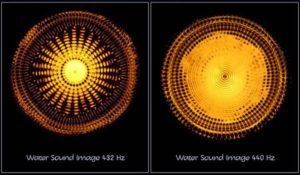 The 432 Hz plugin works on the fly, and can process any music file from CD quality up to 768 Khz including DXD files. It can also process DSD files: DSD64, DSD128 and DSD256 are well tested.

The 432 EVO AEON music server is very power efficient and is always running cool. The 432 EVO AEON can rip, stream, play internetradio, play music from it’s local HDD and optionally from any NAS. We provide 2 TB internal storage options, good for up to 6000 CD’s. The storage can be expanded to 6 TB (special request only) and/or extended via a NAS. The 432 EVO AEON version is used as a high-end USB transports, that connects directly to your USB dac.

All our 432 Hz music servers are running the same Linux software platform, which is identical in terms of remote control, but the HIGH-END and AEON models include specific software tuning features to further improve the sound. You can use the official Logitech Squeezebox Controller App (which works for Android and Apple), the builtin webinterface (any platform) or via Apple specific apps such as iPeng and Squeezepad. The 432 EVO also offers internet based software updates from our own update server, which are created and tested by Klinkt Beter and includes remote support via a built-in VPN.