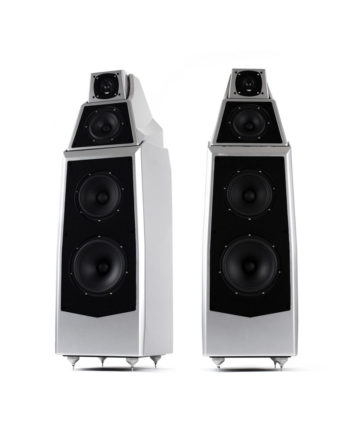 Alexia represents the first entirely new loudspeaker platform from Wilson Audio in nearly half a decade. Two years in development, Alexia brings the superior propagation delay technology of Wilson’s flagship loudspeakers to a compact design with a footprint not much larger than a Sasha W/P.

Alexia represents the first entirely new loudspeaker platform from Wilson Audio in nearly half a decade. Two years in development, Alexia brings the superior propagation delay technology of Wilson’s flagship loudspeakers to a compact design with a footprint not much larger than a Sasha W/P.

Indeed, Alexia derives much of its DNA from the massive Alexandria XLF, and brings the same kind of state-of-the-art musicality to a speaker than can easily live in smaller rooms and more intimate listening environments.

Told by the members of the team that designed and built Alexia, the video below reveals the story of Alexia’s creation, from inception to completion. The challenges of building a compact, three-module loudspeaker were both aesthetic and techni- cal, and, indeed, the project—originally conceived before the Alexandria XLF—had to be put on hold until new drivers and new cabinet construction techniques were perfected in Wilson’s flagship loudspeaker, before the technology could be readily deployed in a brand new speaker platform.

The result is an exciting new benchmark in musical realism—not merely an enlarged Sasha, or a diminuitive MAXX, but an entirely new thing, one that completely rede- fines the performance envelope for a loudspeaker its size.

Independent research has demonstrated people are easily able to detect the sonic effects that result when the leading edge of transients from multiple drivers are misaligned in the time domain. In fact, listening trials have shown that timing er- rors on the order of 20 millioneths of a second are readily discernable to the ear. In musical terms, this translates into loss of focus, speed, transparency, and timbral accuracy. In other words, music sounds discerably less real.

Surprisingly, few loudspeaker designers are concerned with precise time alignment, and even those who are can, because of their cabinet designs, only align the drivers for one fixed listening distance and ear height.

Wilson Audio has long recognized the only way to build a loudspeaker capable of accurate time alignment in any number of listening environments is to offer both midrange and tweeter adjustability relative to the woofers. Furthermore, by allow- ing rotational adjustment on the polar axis, the dispersion of tweeter and midrange can be optimized for a wide range of listening positions and room types.

Prior to Alexia, this ability (which we call Aspherical Propagation Delay) has only been available on our largest loudspeakers, namely MAXX Series 3 and the Alexandrias. Anyone familiar with MAXX will rec- ognize the unique brass “stairstep” pictured above, now duplicated on Alexia, an integral part of its Aspherical Propagation Delay system. And with its compact profile, Alexia now makes the most precise and adaptable time alignment a reality for even the most intimate listening spaces.

Central to the development of the flagship Alexandria XLF was the design of a new tweeter, which had to do three things: a) exhibit wide bandwidth with exceptional linearity, b) match the power-handling ability of the other drivers in the system, and c) play low enough in the frequency band to mate well with the acclaimed Wilson Midrange Driver. Dave Wilson auditioned all of the latest tweeter designs boasting exotic materials like diamond and berylium, and found them all deficient in at least one of the designated criteria. So he opted to create a new tweeter to meet his specifications. The resulting Wilson Convergent Synergy Tweeter has been recognized as a major contributor to the magic and musicality of the XLF.

It was, therefore, a foregone conclusion that a slightly modified version of this new tweeter would sit atop the driver stack in Wilson’s new compact statement loud- speaker, Alexia. As in any great design, however, the success of any one component is contingent on the synergy it achieves with every other contributor to the whole.

The development of the Wilson midrange driver for the Alexandria X2, based on Dave Wilson’s critical listening experiences in Vienna’s Musikverein Concert Hall, is by now a well known tale. So important was this breakthrough in driver technology, that the Wilson midrange is now used in appropriately modified contexts in every one of Wilson’s floorstanding loudspeakers. The version used in Alexia is virtually identical to the midrange found in the Alexandria XLF.

Finally, Alexia demanded two brand new woofers, an 8 inch and 10 inch, optimized over an eighteen month period to achieve a degree of bass extension unprecedented for an enclosure of its size, with- out sacrificing mid-bass detail, or the explosive speed and dynamic contrast that listeners have come to expect from Wilson Audio loudspeakers.