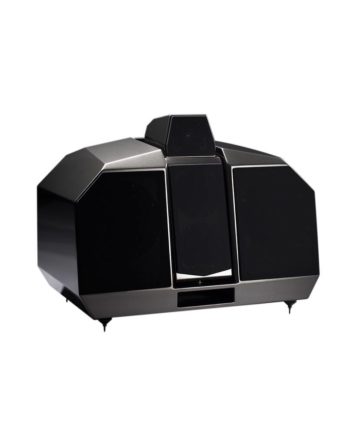 Polaris is a low-profile flagship speaker designed to solve architectural challenges such as where a tall loudspeaker would obstruct a window view or intersect a wall-to-wall theater screen. Whether it is employed as a reference-quality center channel, or as a low-profile music system, Polaris is engineered to achieve the same levels of performance as Wilson Audio’s flagship loudspeakers.

Polaris
Polaris—The North Star—anchors the rotating night sky as the immovable center above the North Pole. The task of a center channel loudspeaker is to provide the grounded, centered, aural point around which swirl the action, music, and emotion of the home theater experience.

Polaris—The North Star—is in reality a triple star system. Similarly, Polaris ™— the loudspeaker—was conceived to serve more than a single function. Polaris is a low-profile flagship speaker designed to solve architectural challenges such as where a tall loudspeaker would obstruct a window view or intersect a wall-to-wall theater screen. Whether it is employed as a reference quality center channel, or as a low-profile music system, Polaris is engineered to achieve the same levels of performance as Wilson Audio’s flagship loudspeakers, Alexandria® Series 2 and MAXX® Series 3.

To create a low profile loudspeaker worthy to occupy the same space (literally or figuratively) as Alexandria and MAXX meant that several design challenges had to be met.

Polaris had to incorporate Wilson’s flagship loudspeakers’ characteristic tonal accuracy and coherence. It had to meet the same standards of dynamic contrast and speed. Finally, it had to achieve the level of transparency, detail, and spatial resolution that set Alexandria and MAXX at the pinnacle of audio art.

Features
If you’re going to stand among giants, it’s to your advantage to share as much of their DNA as possible. For Polaris, this meant starting with the tweeter and midrange from Alexandria.

The tweeter also comes directly from the Alexandria Series 2. All tweeter diaphragms are acoustically semi-transparent. This means the tweeter back wave, reflecting off the enclosure baffle, will partially propagate through the diaphragm, adding an overlay of “grain” and distortion to the front waveform.

The use of proprietary materials, along with Wilson-developed mechanical configurations have proved extremely effective in reducing this form of noise, which, though minute, is nonetheless both measurable and audible, robbing the high frequencies of the last degree of transparency and clarity.

The Alexandria/Polaris midrange was developed in-house to Wilson’s specifications in partnership with a new driver manufacturer. Because of its extraordinary alacrity and freedom from intertransient noise, this driver is able to resolve the earliest reflections (20 to 80 milliseconds) generated by acoustic instruments in a particular performing environment that are critical to imparting to those instruments their distinct sonic “signature” in that environment. This is, in large measure, why Alexandria, and now Polaris, is unparalleled in creating convincingly realistic portrayal of live music.

The Polaris ten-inch woofer, developed specifically for this loudspeaker, was tasked with bringing the equivalent grand scale weight and authority of Alexandria and MAXX Series 3 to a compact, low profile design. When it comes to deep bass, weight and authority are often achieved at the expense of transient speed and alacrity. But it is the marriage of these opposites that has long been the hallmark of Wilson Audio loudspeakers.

Alongside Alexandria and Maxx Series 3, Polaris is now the third Wilson Audio loudspeaker to feature Aspherical Propagation Delay which allows an unprecedented control of both time domain and dispersion characteristics to achieve increased soundstage width, height, and depth, as well as better tonal coherence and accuracy.