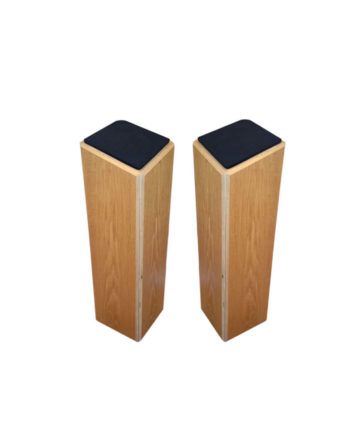 Loudspeaker Description
On the face of it, about the last thing we need is yet another new loudspeaker! In fact, it would appear that from 1931 (Rice & Kellogg) to now, every possible permutation has been expressed. No matter; “new” designs continue to appear and disappear. And who would have thought that in the last ten years, we would have witnessed the vacuum tube rebirth and revolution, not to ignore the many formats and raging controversy in solid state as well.

Our observation of this controlled, commercial chaos has a specific calming effect. We are far too small to have grand commercial aspirations and find the warlike climate distasteful. We are also foolish enough to believe that if we study and practice hard enough, we may discover real artistic solutions to acoustic problems ………………Which brings us to 1934, Westphalia, & Enckel, the original designer of the OMNIDIRECTIONAL or Kugellautsprecher. His loudspeaker was brought to the U.S.A. in 1955 and was used for the first FM STEREO experimental transmission of the Chicago Symphony under Stokowski, to New York via the Crosby system. The impression, shared by many, was that this was a stunning achievement technically and artistically. Of course, it was hardly commercial or mainstream and thereby disappeared.

The effect upon me was absolutely conclusive. It was clear that the only valid approach to recreate the radial, OMNIDIRECTIONAL waveforms in real life was to utilize OMNIDIRECTIONAL LOUDSPEAKERS. (I have covered much of this in previous writings.) The new vertical loudspeakers with diamond shaped baffle shall be called the “COMPASS” and “STARTER”. This is nothing more than a continuation of the work we started in 1977 after many years of investigation begun in 1952.

The enclosure is a rigid pipe with two dissimilar chambers for the Compass and one chamber for the Starter. The bass loading is achieved by means of strategically placed friction slots. This specific loudspeaker pays homage to Briggs & Voight as well as Enckel, Hegeman, & Fuller. The diamond baffle is ideal to reduce unwanted typical diffraction problems and thereby produce a smooth, uniform radiation characteristic. The one-inch (19 mm) titanium tweeter with neodymium motor is our first choice device and is used in some of our other loudspeakers. The six and one-half inch woofer with a truly extraordinary new hybrid cone is almost spectacular. The filter network, as in all of our designs, is 6dB trailing edge for the woofer and 18dB leading edge for the tweeter. NO ZOBELS, RESISTORS OR SPECIAL CORRECTIVES. The phase is correct and seamless.

The enclosure is our standard 19mm Finland birch with a variety of available face veneers. All four surfaces are finished, permitting a variety of placement choices, including surround applications. Connection is made in the base and will accommodate any gauge wire.

We believe you will find the overall performance, for the modest size and price, to be quite special. We take a peculiar view of so-called specifications as they tell very little about the actual sound produced. (Almost like specifying the smell and taste of food.)

Though the sensitivity is reasonably high, and one may employ a modest amplifier for a small domestic environment, we did spend the final months of engineering utilizing a quite powerful 200-Watt per channel amplifier in a 29,000 cubic foot space playing, at times, at quite loud levels. At all times, on classical or jazz music, very low levels of distortion were maintained.

The following beyond full functionality applies for this product(s)