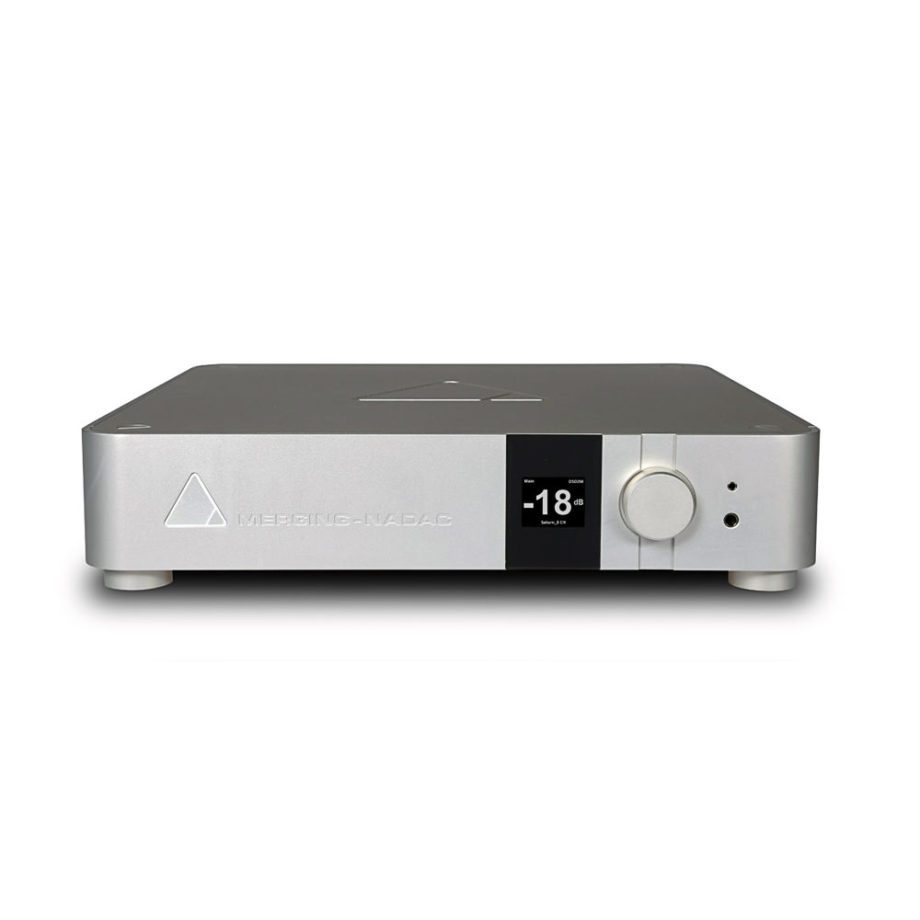 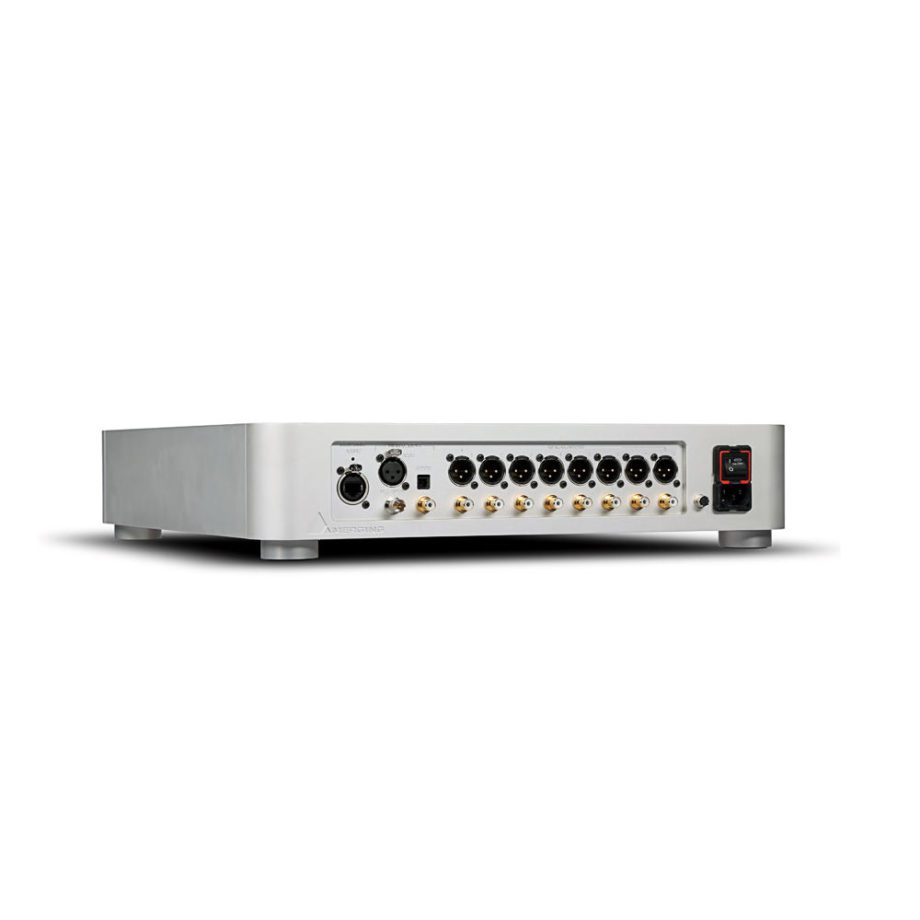 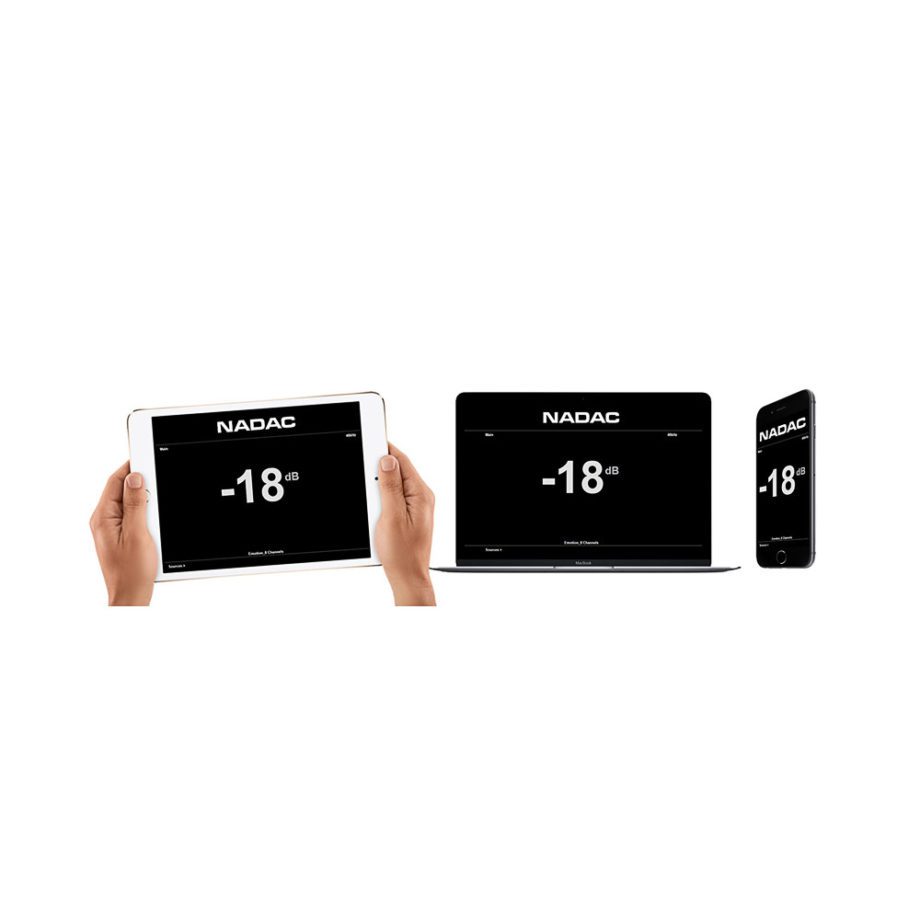 Benefits gained from years of developing cutting-edge products for the professional recording community can be made available to the discerning audiophile.

NADAC – NETWORK ATTACHED DIGITAL TO ANALOGUE CONVERTER
Advanced technology developed for F1 racing has dramatically benefited every modern car. Similarly, benefits gained from years of developing cutting-edge products for the professional recording community can be made available to the discerning audiophile. The NADAC is not unique because of the components it uses, but in the care with which it was designed and the experience behind it. By introducing RAVENNA networking to the home, we not only remove traditional limitations, we totally transform the performance we can deliver.

NADAC is offered in two versions:

STEREO
The 8 channels of the ESS Sabre ES9008S Reference D/A converter are merged into 2 for improved linearity, greater dynamic range and a lower noise floor.

MULTICHANNEL-8
The 8 channel version can be set at any time to operate in 8 discrete channel mode, or stereo mode to enjoy the same advantages of merging 8 into to 2 channels as the stereo version .

NETWORK ATTACHED DIGITAL TO ANALOG CONVERTER
Nice acronym, but what is it all about? The modern world has become dependent on networks and the technology has been designed to be reliable and scalable. As the network capacities have increased, the possibility of using IP networks for video and audio became an obvious choice. Clearly Gigabit Ethernet had sufficient capacity for high quality audio but it was not optimal without an additional protocol adding the required precision and management. Merging needed to move away from the PCIe technology that had served us well for many years and we looked at alternatives that could offer sufficient accuracy and reliability with high channel counts and Hi-Res Audio data rates. Other IT based point-to point connections such as USB or Firewire were either not optimum or obsolete for audio even though other manufacturers had pressed them into service. There was only one choice that made sense: RAVENNA.

DETAILS ON RAVENNA
This open and published IP network technology had been created to meet the demands of national broadcasters and focused on essential requirements of extremely accurate clocking, high resistance to packet loss and very low latency. Initially it did not encompass high PCM sampling rates and certainly not DSD. However, it was not difficult to make changes to allow that, so Merging worked closely with the developers to make sure that sufficient channels at up to DSD256 could be handled with an accuracy that exceeded anything previously available. It remains the only logical choice for the professional and the audiophile and is now available in NADAC. The added bonus to using an advanced networking solution is being able to send and receive control information as well as audio data. This opened up exciting possibilities in the studio and now you can enjoy these same benefits in your own home.

COMPATIBILITY
The RAVENNA protocol comes with absolutely standard drivers for any computer operating system. ASIO for Windows, CoreAudio with DoP support for MacOS. As easily installed and configured than any other driver for USB or Firewire, the NADAC-RAVENNA driver allows then using any application of your choice to playback your music files, Emotion, JRiver, Audirvana, iTunes, etc… as well as any music server or streamer able to communicate through those standard ASIO or CoreAudio drivers.

NETWORK CONFIGURATIONS
So, what is this network story about and what does it allow for ?

Better that any pontificating sentences and technical explanations, some drawings will simply illustrate the most common applications and scenarios that can be achieved with NADAC in a networked environment !

PEER TO PEER CONNECTION TO A COMPUTER OR SERVER
Just plug a cat5e or cat6 cable between the NADAC and any computer, music server or streamer and send audio to the NADAC from your favorite application through the standard ASIO or CoreAudio driver. As soon as the playback application is running on the computer it will appear in the NADAC source selection menu, exactly like any internal digital input. Select it… et voilà!

REMOTE CONTROLLING NADAC FROM ANY SMARTPHONE OR TABLET
If you use your NADAC with a CD transport or any other device connected to the digital inputs, just connect your NADAC to your Wifi hotspot to access it from any web browser like Safari, Internet Explorer, Chrome, etc… You can then control the main output level and the source selection.

THE MOST USUAL CONFIGURATION
Connect your NADAC and your computer to the same switch or Wifi router and enjoy audio playback from that computer and remote control from any smartphone or tablet.

MULTIPLE NETWORK SOURCE
Any computer, music server or streamer connected to the network can be selected as an audio source for the NADAC. Any playback application running on any of the computers will appear in the NADAC source selection menu, exactly like any internal digital input. A different source can even be selected for the main NADAC output and the headphone. As above all sources can be from different application, different operating system, different computer type.

MULTI-ZONE
Multiple NADAC can coexist on the network and can listen to the same source. Just select the same source on the front panel menu and you easily integrate a multi-zone system. Each NADAC can however be independently remotely controlled with a different volume control. 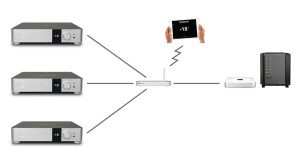 MULTI-ZONE AND MULTIPLE SOURCES
As easy as the above examples, having multiple zones and multiple sources is as simple as plugging them on the network. Any NADAC can listen to any source and all these devices can be accessed from a single tablet or smartphone. 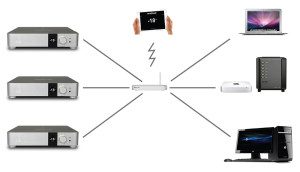